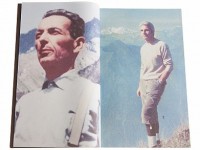 Every winter between 11 November and 2 February the sun fails to rise above the flanks of the Alps, leaving the North Italian village of Viganella completely in shadow. Situated in a narrow valley at the end of an 80-kilometer road it is subject to an exodus of its population. Only the center of the village is inhabited, merely by elderly people. Residents of Viganella and the neighboring villages who face the same problem blame the lack of sunlight in winter. The mayor raised funds for a large computer-operated mirror, to be built 500 meters up the slope high above the village. For seven hours a day it reflects the sunlight to the central square of the village. It is also found useful to defrost icy roads. And as a gift it illuminated the house of a lady celebrating her 90th birthday. In the mountain regions old laws have always reigned relations between man and nature. Working the hardest rocks or climbing the highest heights. Photographs: Niels Stomps Design: Sybren Kuiper / -SYB-, Den Haag Number of copies printed: 750 Format: 150 x 240 mm portrait format, 100 pages Finishing: Sewn/Stitched in soft cover + flaps Impressum: Mart. Spruijt, Amsterdam 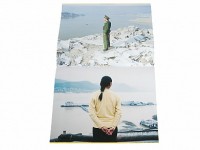 "All those old rural towns and villages have now been replaced by several brand-new cities. White. Modern. Huge. Not evolved naturally over time, but suddenly sprung up from the ground. This is the place where people now live. No part of these new surroundings reminds you of the past. There is no place for any historic awareness or aesthetic ideals here. At least, not as far as I could tell. If a blind wall needs a window in it, they simply hack out a hole at the designated place and put in a frame. Not necessarily pretty, or approved by the authorities – let alone a building aesthetics committee. These ‘rogue’ windows are everywhere, but it takes a while until you actually see them. It took me a few days to notice the first one, in a building that had drawn my attention a few times before, though I didn’t exactly know why. Suddenly, I saw it! There, on the middle floor, right in the centre of a huge blind wall, a single hole had been carved out. A Cyclops’ eye. " Diary notes form Mist 2008 The Three Gorges Dam is built in central China. The project, which has been underway for the past 20 years, involves the repatriation of one million local residents. They were forced to take part in a mass migration which will dominate their lives for twenty years. Still, despite their seeming passivity and acceptance, they do not seem defeated. They simply adapt and continue with their lives. Photographs: Niels Stomps Design: Sybren Kuiper / -SYB-, Den Haag Text: Niels Stomps, Sybren Kuipers Essay: Catherine Somzé Number of copies printed: 1000 Format: 240 x 320 mm landscape format, 116 pages Finishing: Sewn without a cover and with yellow dyed glue EAN: 9-789086-900503